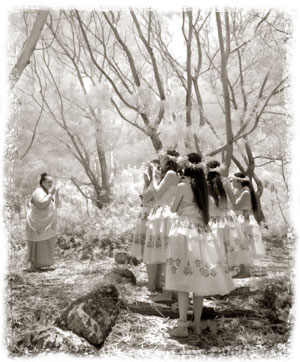 In 1967 the Cooke family built a retreat for themselves on land that had been in the family since 1908. Twenty-two years later, in 1989, Rik and Bronwyn Cooke began to teach photography classes in the family lodge, which had now become their residence.

As the workshops grew in frequency, they learned how satisfying it was to share their home and land with others. Soon Rik spent less time as a photographer and more time as a land steward and they began to donate their home to the organization for educational purposes and restoration of the surrounding acres. The land was being transformed as it was shared.

As both students and teachers reported having experiences that changed their lives for  the better, more teachers inquired about teaching at their home. In 1994, Hui Ho’olana was formed and granted a 501(c) (3) to run educational workshops.

Rev. Lehua Mokuilima gave us our name, Rik recalls. Hui is a Hawaiian word for a group. Ho’olana irefers to “the type of inspiration that floats up from within the heart”. It means “to bring back into balance – as in righting a canoe – and to comfort those in mourning.” We hope to live up to her blessing.

In 1997, Butch Haase began a reforestation project on the land, cutting down eroding eucalyptus trees and reintroducing native and endangered species. Since then, they have been able to clear, terrace and restore more than two acres with over 25,000 native Hawaiian plants, some endangered. This remarkable project is now known as the largest private dry land habitat restoration project in the state and serves as an educational center for people who come to learn and grow.